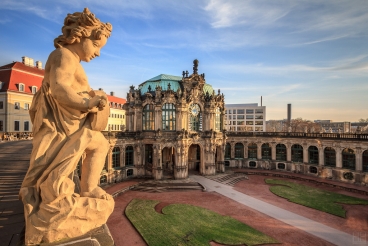 The main attraction of Dresden and the best example of late Baroque architecture in Germany. Zwinger Palace was built in the 18th century by order of Augustus the Strong, Elector of Saxony. In its halls supposed to keep the cultural and historical values: paintings, sculptures, porcelain, silver and gold. In addition, the Zwinger often used for celebrations, which were attended by members of the royal family and the aristocracy know.

Today Zwinger is a whole complex of pavilions, which represent unique antiques. This is a paradise for hikers and those who even slightly interested in world history and art.

In the 19th century architectural ensemble complemented Zwinger Old Masters Picture Gallery, which holds about 750 pictures. Among them are such masterpieces as "The Sistine Madonna", "Sleeping Venus", "Chocolate" and many others. The gallery is open from 10:00 to 18:00, Monday - day. The ticket costs about 10 euros.

In Mathematics and Physics Salon Zwinger exhibited rare optical and astronomical objects. There are tools for counting, drawing, pressure and temperature measurements, which were used in the 16th century. In addition, the museum is famous for its unique collection of celestial globes and maps. Among these exhibits worthy of our attention vintage globe, created in the 13th century in the Middle East. He demonstrates that prevailed at the time the world looks to the device. Interior works just like an art gallery, from 10:00 to 18:00. Tickets cost about 6 euros.

Another gem Zwinger is a unique collection of porcelain, which experts called the most exquisite and rich collection of porcelain in the world. In the museum you can find fine examples of early Meissen porcelain and East Asia. Represented here today and porcelain ware from China and Japan started for ages 17-18. Tour of the Porcelain Pavilion costs about 6 euros. Please note that the photograph in the halls Zwinger is strictly prohibited.

From the Central Station to Dresden Zwinger pretty close. A walk will take 20-25 minutes, if you move through the streets and Schloßstraße Taschenberg.