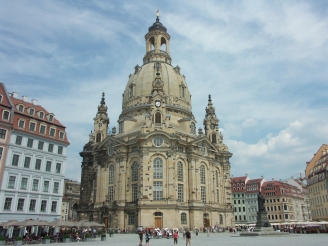 In the old part of Dresden, Neumarkt square, is a magnificent Frauenkirche church made in baroque style. This is one of the most majestic of the Protestant churches in Germany. At the height of the structure is more than 90 meters, and the dome of the temple - 26 meters, is the largest dome in the world made ​​entirely of stone.

The first church on the site appeared in the 11th century and in the 18th century, thanks to donations from citizens, the square was erected a large new temple. However, it was waiting for the plight. At the end of World War II suffered from Frauenkirche bombs. From the lovely church, which was built more than 15 years, remains a pathetic pile of stones. Temple built again only in the early 90s.

Today, the church is considered one of the main decorations Dresden. Frauenkirche striking not only for its size but also the beauty of the interior decoration. The most prominent is the elegant sculptural composition - the altar, and white-gold body, which hovers over her.

Frauenkirche - a functioning church, morning Mass begins at 11:00 am, evening - at 18:00. Mass accompanied by the sounds of organ and church bells. In addition, the church often hosts concerts of classical and organ music. With their schedule better on the official site of the temple. By area Altmarkt, which is within walking distance of the Church, can be reached by S-Bahn lines 1, 2, 4 or 12; to the area Pirnaischer Platz - line 3, 6, 7, or by bus number 75.