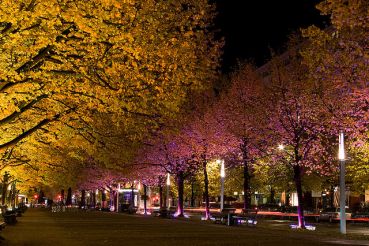 Main Street Berlin, his heart, pride and beauty. On Unter den Linden home to many places of interest and monuments of architecture and culture. Street begins at the Brandenburg Gate, a symbol of Germany, and leads to the bridge across the Spree River, its length - about 1.5 kilometers. In the Middle Ages it was common for road riding, at which King Frederick II went hunting. Then, at his command along the road on both sides landed noble linden. Hence the name, Unter den Linden, means "under the linden trees." Gradually the street has become a favorite place for walking locals and romantic, and in 1770 there appeared the first houses of the court aristocracy.
Today, thanks to tourists Boulevard became even more popular. No tour of Berlin nor complete without visiting the famous all over Europe Unter den Linden. Richest history of the state is reflected in the buildings that stand on either side of the street: Humboldt University, the former Palace of crown princes, building State Opera, Berlin Cathedral, Tseikhgauz (Arsenal), numerous embassies, as well as a hotel " Adlon ", which stayed and continue to stay crowned heads, famous statesmen, scientists and actors.
On these and many other attractions in Berlin, travelers can see for free, just strolling under the lindens. But visiting museums itself be costly - from 5 to 12 euros. Therefore, in order to save the tour is better to buy a special card called Berlin WelcomeCard. It gives 25-50% discounts at museums and restaurants, the right to use public transport free of charge, except the buyer receives a detailed diagram of the city as a gift. Berlin WelcomeCard is of three kinds: 48 and 72 hours and 5 days. Its value depends on the duration, the lowest EUR 18.90 (2 days), maximum - 34.90 EUR (5 days). Card sold at tourist offices, major hotels, railway stations, airports, subway stations.
Reach Unter den Linden by bus number 100, 147 and 200, on the metro - station called Brandenburger Tor. The main part of the Berlin Museums and galleries open from 10.00 to 18.00.